The Doha oil talks concluded with a resounding thud over the weekend, as media sources reported an abrupt end to talks aimed at curtailing oil supply.  Iran’s absence at the meeting was cited as a primary catalyst for the end of talks.  We expect oil to trade lower, as markets unwind some of oil’s recent run-up that occurred in anticipation of more positive news.  Brent crude closed Friday 14% above its 100-day moving average and more than 50% above the January lows near $26.  Given the elevated correlation between credit spreads and oil prices, we would not be surprised to see some near-term spillover into financial markets more broadly, as oil market expectations are reset.

Meanwhile, we continue to focus on the overall health of conditions through the lens of our fundamental conditions barometer (graph, below).  The barometer focuses separately on market based indicators, forward-looking domestic economic data, and foreign inputs.  Collectively, they provide the impulses that drive our assessment of “fundamental” conditions.  The weaker growth story pointed to by the barometer is now corroborated by the International Monetary Fund (IMF), who lowered estimates of world growth in their most recent World Economic Outlook.  The IMF recently lowered its growth forecast to 3.2% from 3.4% in 2016, in part due to weak exports, slowing investment in the United States, slumping global commodity prices, and a consumption tax hike in Japan.  Closer to home, the Atlanta Fed’s GDP Now model is tracking toward 0.3% real GDP growth for the first quarter. 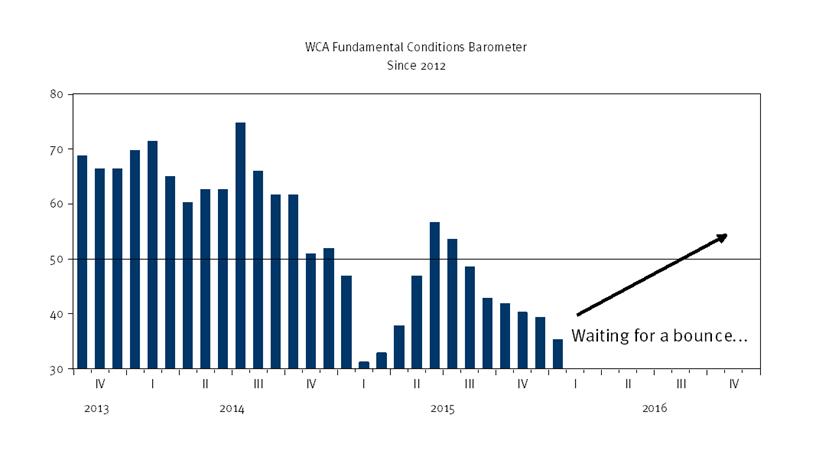 In our view, the recent rally in stocks was underwritten by a pivot by central banks toward a less hawkish posture in the case of the Federal Reserve (Fed) and greater easing by the European Central bank (ECB).  However, the key ingredient of stronger real economic and earnings growth is not yet evident.  We see that S&P 500 expected earnings still meander sideways, helped along by massive stock buybacks and hampered by slumping energy sector earnings.  According to FactSet Research, the combination of lower cash flow and continued strong buybacks lifted the ratio of share buybacks to free cash flow to 102% last year.  Meanwhile, investment as a percent of GDP fell in each of the last three quarters, and exports fell as a percent of GDP in each of the last six quarters.  Consequently, the sideways movement in the S&P 500 and Dow are largely explained by the same behavior in the earnings per share figures in recent months.  The more interesting stories are playing out in the bond market.

A closer look at the bond market reveals a tightening in real short-term interest rates starting in 2012 and followed by a rise in corporate credit spreads (Moody’s Baa – LT Treasury) from roughly 150 basis points in 2014 to over 220 basis points today, indicating concern over potential defaults tied to energy investments.  The rise in credit spreads was accompanied by a steady climb in financial system stress as indicated by the St. Louis Fed’s Index of Financial System Stress and renewed underperformance by the S&P 500 financials index.   Adding additional color to the story playing out in credit markets is background concern over the possibility of deflation.  The long-run inflation expectations priced into the TIPS market have generally been sliding lower since 2014 as well.

Complicating matters for the Fed is the fact that the employment picture continues to strengthen with the unemployment rate converging with “full employment” (Congressional Budget Office (CBO) estimate) and the output gap moving quickly toward 0% (see graphs, below).  Based only on the output gap and employment data, the Fed should be tightening more aggressively, but the broader markets are not cooperating.  Hence, the Fed is confronted with a dilemma —  wait to raise and risk stoking bubbles or press rates higher and risk creating the very volatility they are seeking to avoid?

Something’s Got to Give

Will the economy kick back into gear through the second half or not?  If so, we would expect to see data begin to turn.  As of this writing, we cannot say that the market’s bounce off the bottom is supported by much in the way of broadly improving fundamentals.  Neither market-based indicators or foreign data have turned sufficiently positive to warrant a change in tactical positioning since the start of the year, and the domestic economy portion of the data is at a near-neutral reading.  We are prepared to move in either direction from here based upon the path for fundamentals.

LONG-RUN STRATEGIC POSTURE:  Our macro outlook is for slow growth and stubbornly low inflation. The start of policy normalization following years of zero interest rate policy in the United States comes at a time of weakening global growth and mixed signals from the domestic economy. We continue to view the United States economy as best positioned to weather the overall weak global environment that resurfaced in 2015.

The WCA Fundamental Conditions Barometer measures the breadth of changes to a wide variety of fundamental data.  The barometer measures the proportion of indicators under review that are moving up or down together.  A barometer reading above 50 generally indicates a more bullish environment for the economy and equities, and a lower reading implies the opposite.  Quantifying changes this way helps us incorporate new facts into our near-term outlook in an objective and unbiased way.  More information on the barometer is found in our latest quarterly report, available at www.washingtoncrossingadvisors.com/insights.html