The Trade Mess — How Did We Get Here?

The WCA Fundamental Conditions Barometer’s forecast path slipped to an average reading of 55 from 60 this month (chart, the bottom of page). CONQUEST tactical equity allocations trimmed back to a slight overweight to align with the barometer. The main story of last week was the rise in trade concerns stemming from the threat of new tariffs and reprisals. This week we spend a few extra minutes discussing our view of trade issues, its causes, and potential outcomes.

The Trade Mess — How Did We Get Here?

Some simple economic accounting concepts can go a long way to trace the causes of the current trade tension with China. What we hope to show is that the root cause of the issue can best be seen by focusing on the inner workings of China’s economy.

According to basic national accounting identities, everything that a country produces must either be consumed domestically (by households or government), used in domestic investment, or exported. This identity is an essential and inviolable accounting concept in all countries national accounting frameworks.

Household consumption is usually the most significant piece of the puzzle. Roughly 70% of United States’ and the United Kingdom’s output is consumed domestically, for example. Germany, France, Italy, and Japan all consume nearly 60% of their domestic production. Overall, consumption tends to land somewhere in the 60-70% range across most of the developed world.

This relationship does not hold for China, however, despite its enormous size. China’s household consumption amounts to only about 34% of domestic output (chart, below left), far below the level of most developed countries. Investment, government spending, and exports must absorb the remaining 66% of production (chart, below right). Over the past few years, about 50% of China’s output was directed into investment, 13% to government spending, and 3% to net exports. 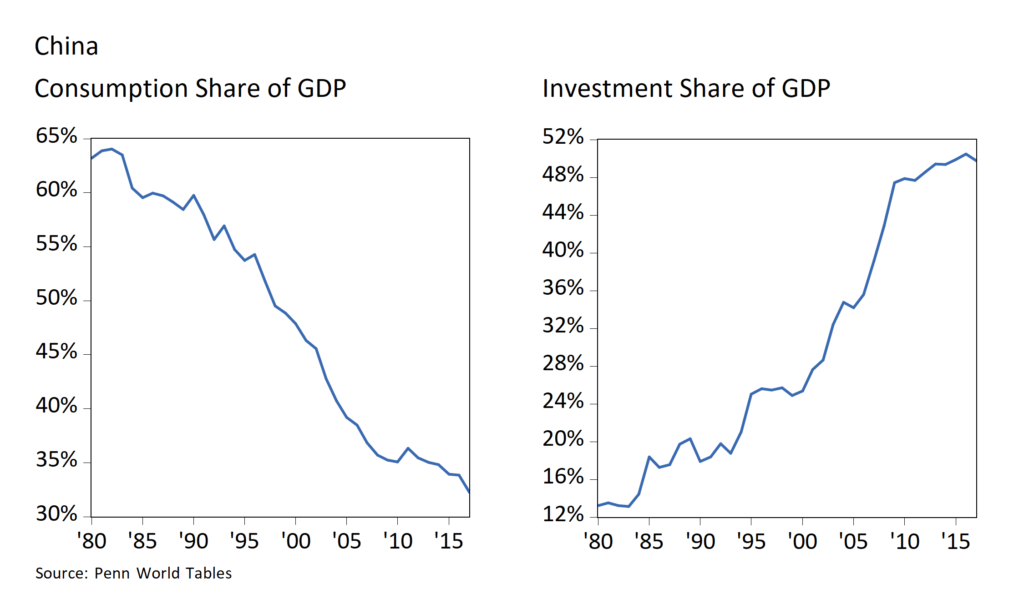 As the chart above shows, consumption’s share of China’s economy has slid while investment’s share of China’s economy has grown very large very quickly. In the absence of rising consumption, this growth in investment prevented some combination of falling output, surging government spending, or surging net exports given national accounting identities. The important thing to understand is that China’s investment boom is absorbing most of China’s excess production, while China’s trade surplus (aka. our deficit) provides a much smaller, secondary means for China to “vent” excess domestic production.

These imbalances have been well understood around the world and inside China. The Chinese leadership has repeatedly promised to enact measures to “rebalance” or increase consumption as a share of the economy in recent years. As the charts above show, they have not been successful as consumption continues to fall as a percent of China’s gross domestic product (GDP) and investment soars. Remembering that our trade deficit with China represents excess, unconsumed Chinese output, we question what sort of changes would be needed to encourage Chinese household consumption? To answer this question, we must ask what may be causing China’s consumption share of GDP to be so low in the first place.

We think a plausible answer lies in long-standing and deeply entrenched Chinese government policies that discourage real wage growth and household consumption. These policies act as hidden taxes on Chinese consumers while providing direct and indirect subsidies to China’s government-owned businesses and export industries. The weight of these policies erodes the average Chinese citizen’s ability to consume and attain a standard of living enjoyed by most people in other large, well-developed countries. While not directly trade policies, they indirectly have a big impact on trade as they lead to a large gap between excess Chinese savings relative to investment.

Many government policies in China undermine of the Chinese household sector. These include systematic currency devaluation, financial repression, environmental degradation, lack of a social safety net, regulations restricting labor mobility, property and legal rights, etc. Collectively, these policies have undermined real Chinese wage growth, stimulated excess savings, and eroded consumption. All of this contributes to “unbalanced” growth, something the Chinese government says it wants to fix.

But making these changes is hard to do, mainly due to political resistance. China, for years, has relied on state-directed investment to achieve targeted levels of growth. While investment has been easy to direct by the state, it has been far more difficult for China to raise consumption without sweeping, painful, and politically unpopular reforms. Political realities inside China make it nearly impossible to enact such changes. However, as debt piles up, and the United States becomes less willing to accept Chinese surpluses through trade, economic pressure is mounting.

We think China, therefore, is in an awkward position. China cannot abandon its directed investment model without first adopting a set of politically unsupportable policies. Moreover, if such policies were enacted, China would abandon the development model that got them to where they are today. They would be embarking on a new and risky path which will almost certainly guarantee that China will grow much more slowly, albeit more sustainably, than today’s rapid 6-7% growth rate.

If the perpetuation of flawed policies led to current maladies, resolution of the root cause should convey benefits. The United States could see its finances on a more sustainable footing with better growth prospects if current trade negotiations lead to constructive change. China could also be put on a more sustainable growth path built on steadily rising consumption and better standards of living for large numbers of Chinese people. A more empowered Chinese consumer class, in turn, could provide a source of opportunity, growth, and stability for the broader world economy. Capital may ultimately end up being deployed more efficiently, led more by market forces, potentially resulting in higher long-run global growth. Therein lies the silver lining, in our view.

So as you can see, the ongoing trade issues we are now experiencing with China are deeply rooted in long-established arrangements within China itself.

We see three likely trends for China over the short-to-intermediate term. These include 1) further reliance on directed investment; 2) expanded government stimulus and spending programs; and 3) a continued rapid rise in debt. If these trends continue unchecked, we think China’s model will ultimately be at risk — ultimately undermined by non-productive investments and excessive amounts of bad debt. If this occurs, China’s “growth miracle” is likely to eventually reach an end much the same way the Latin American or Japanese growth miracles did following the 1970s and 1980s, respectively.

A potentially better path would be one that ends up simultaneously improving China’s internal growth dynamics while simultaneously addressing serious imbalances in global trade and capital flows. It is too early to tell whether the current trade imbroglio will ultimately lead China down a path of reasonable and stabilizing reforms, or into a period of more considerable uncertainty.

Our WCA Fundamental Conditions Barometer (chart, below) forecast path ticked down in the latest month. Market-based and domestic indicators remained steady through June, but foreign conditions weakened. The combined effect was a small downward change to the short-term forecast for fundamental conditions. We trimmed equity exposure in CONQUEST portfolios to a slight overweight from a moderate overweight as a result. 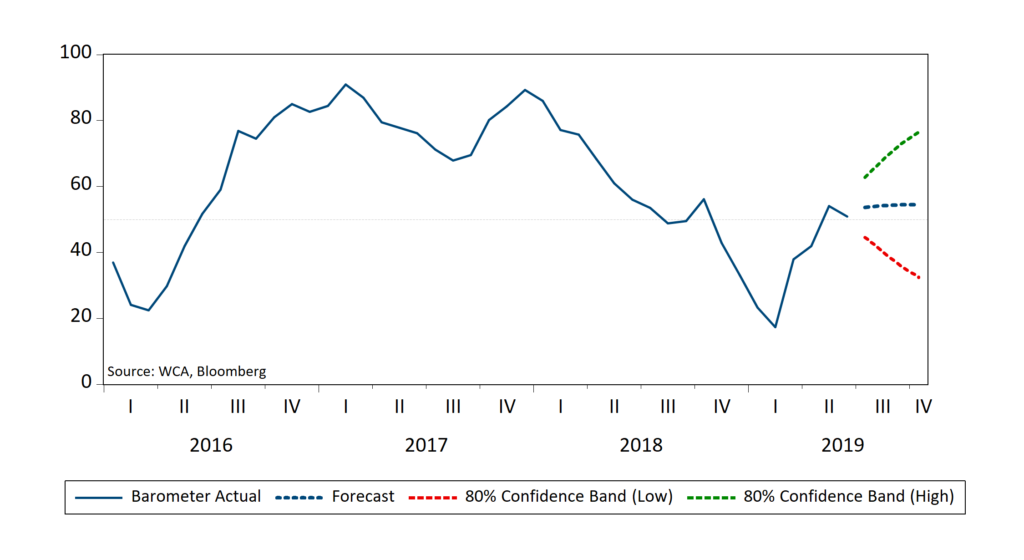 WCA Fundamental Conditions Barometer Description: We regularly assess changes in fundamental conditions to help guide near-term asset allocation decisions. The analysis incorporates approximately 30 forward-looking indicators in categories ranging from Credit and Capital Markets to U.S. Economic Conditions and Foreign Conditions. From each category of data, we create three diffusion-style sub-indices that measure the trends in the underlying data. Sustained improvement that is spread across a wide variety of observations will produce index readings above 50 (potentially favoring stocks), while readings below 50 would indicate potential deterioration (potentially favoring bonds). The WCA Fundamental Conditions Index combines the three underlying categories into a single summary measure. This measure can be thought of as a “barometer” for changes in fundamental conditions.

Asset allocation and diversification do not ensure a profit and may not protect against loss. There are special considerations associated with international investing, including the risk of currency fluctuations and political and economic events. Investing in emerging markets may involve greater risk and volatility than investing in more developed countries. Due to their narrow focus, sector-based investments typically exhibit greater volatility. Small company stocks are typically more volatile and carry additional risks, since smaller companies generally are not as well established as larger companies. Property values can fall due to environmental, economic, or other reasons, and changes in interest rates can negatively impact the performance of real estate companies. When investing in bonds, it is important to note that as interest rates rise, bond prices will fall. High-yield bonds have greater credit risk than higher-quality bonds. The risk of loss in trading commodities and futures can be substantial. You should therefore carefully consider whether such trading is suitable for you in light of your financial condition. The high degree of leverage that is often obtainable in commodity trading can work against you as well as for you. The use of leverage can lead to large losses as well as gains.

This commentary often expresses opinions about the direction of market, investment sector and other trends. The opinions should not be considered predictions of future results. The information contained in this report is based on sources believed to be reliable, but is not guaranteed and not necessarily complete.