The United States appears to be generating better growth these days when compared to estimates of its potential.  The graph below shows how the United States’ output has risen by more than the potential growth estimated by the Congressional Budget Office.  For seven quarters in a row, the economy has produced a higher growth rate than potential, which is absorbing excess capacity.  As this happened, the unemployment rate fell to near 5% from 10% back in 2009.  The total number of hours worked has expanded by 10% over that period as more jobs were added than lost.  Capital investment has grown by 30%, and we are 7% more productive according to government statistics.  Nonetheless, this recovery remains very weak by historic standards.  A closer look at the chart below tells the story.  The light blue bar represents the annual growth in what the Congressional Budget Office considers the “potential growth” in domestic output.  Notice that the potential growth today is about $225-250 billion per year compared to $450 billion or so at the turn of the millennium.  Why has the bar been lowered so considerably? 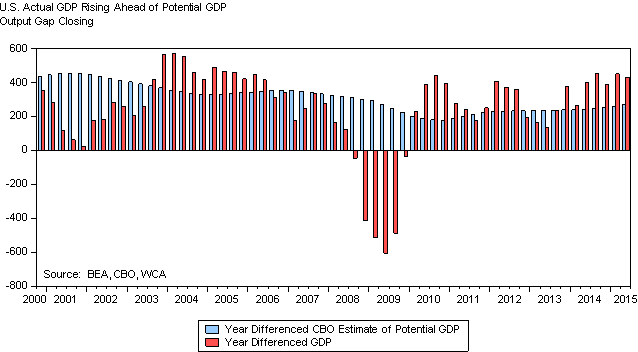 A large part of the answer can be seen in examining trends in the three primary ingredients for growth: productivity, labor, and capital.  In the graphs below, we draw the growth in each of these factors and compare the actual progress versus the longer-term trend line.  The top parts of each graph show the actual versus the trend line, and the bottom shows the deviations above and below trend.  All three factors fell sharply through the 2007-2009 recession, as one might expect.  Following the recession, there was sluggish recovery in labor hours and an even weaker recovery in capital investment.  Productivity, however, continues to trend down.  This pattern is happening not only here, but in other parts of the world as well.  The takeaway for us is that top line growth, excluding currency effects, will likely be slower than what we had gotten used to from the 1980s through the first part of the 2000s.  Consequently, an important return driver for equity valuations is constrained. 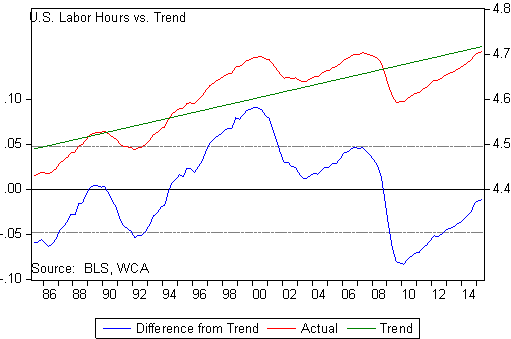 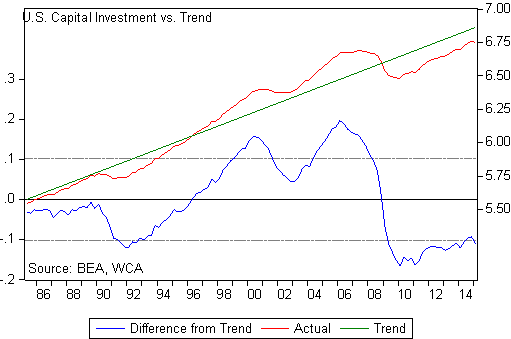 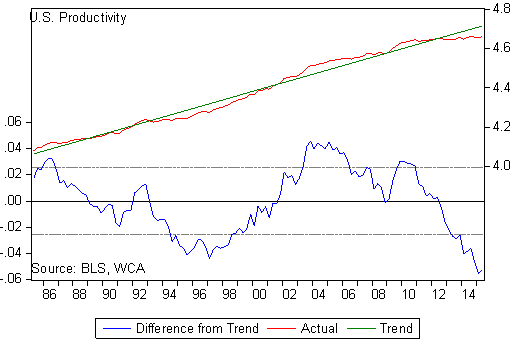 The trends are worse among emerging markets (EM) where a credit boom has reversed.  Aggregate outstanding bank credit among emerging markets is contracting in several EM countries, compounding the effects of weaker demand and falling commodity prices.  The International Monetary Fund (IMF) has been steadily cutting expected growth rates for the emerging markets as a group.  They recently brought their 2015 growth forecast down to 4% for the fifth straight year of slowing growth.  Geopolitical concerns are also weighing on growth in several countries.  The takeaway for us is that top line growth globally is likely to be slower than what we have become accustomed to in recent decades.  Consequently, one of the return drivers for equity valuations and the upside for equilibrium interest rates appears constrained in our view.

We will be releasing our updated long-run forecasts along with tactical positioning as we head into 2016.  2015 has been a weak year in terms of market performance and the composite picture for incoming data.  We expect to see a pickup in data over the next few months, but have yet to see signs of a compelling acceleration in the overall data flow.

This week we will get updates on manufacturing, productivity, and employment.