There is a growing clamor about inflation. Last month’s Consumer Price Index was up 6.2% from a year ago. Many individual items consumers buy are up even more. While shortages are behind some rising prices, we must recall Milton Friedman’s famous dictum that “Inflation is always and everywhere a monetary phenomenon.” This means that a printing press produces a rise in the stock of money, and rising prices follow. Therefore, excess money lies at the root of inflation and not the smokescreen of excuses we hear today.

Same as it Ever Was

Consider the charts below. The top graph shows the annualized growth of money over a two-year rolling period. Since the pandemic began, the amount of money in the U.S. has grown near a 20% rate. Yet, based on resources and innovation, the increase in potential output has expanded by only the low single-digits (Middle Chart). Thus, the growth in “excess money” — the growth in money above and beyond the growth in the economy’s ability to produce — is back to rates not seen since the 1970s (Bottom Chart). This is a recipe for rising prices, and those who remember the 1970s remember the corrosive effects of moderate to high inflation. It is not surprising, given the amount of money created in the past two years, that we are again seeing inflation reminiscent of the 1970s.

Today, we again see high government spending and deficits. Since 2019, the United States Government debt outstanding rose to $28.9 trillion from $23.2 trillion pre-pandemic, a $5.7 trillion rise. Just last month, borrowing rose $480 billion, the most since the early days of the pandemic. Recent budget negotiations prove just how unpopular taxes or public borrowing remains as a way for the government to pay its bills.

Instead, the quantity of money is increased by having the U.S. Treasury (one branch of the federal government) sell bonds to the Federal Reserve (another branch of the federal government). The Federal Reserve (Fed) pays for the bonds with freshly printed Federal Reserve notes or by entering on its books a deposit to the credit of the U.S. Treasury. The government then pays its bills either with cash or checks drawn on the Treasury’s account at the Fed. In this way, politicians can pay for spending without raising taxes or borrowing from the public.

Just as politicians in the 1970s blamed OPEC and unions for inflation, scapegoats are found today. COVID-19, immigration, and supply issues are today’s proximate and easily identifiable causes of today’s inflation. Few focused on high government spending and deficits.

The consumer price index (CPI), published by the Bureau of Labor Statistics (BLS), is a cost-of-living index. It is almost always used as the benchmark for inflation, but it does not claim to measure the value of money — a more traditional concept of inflation. Instead, it is designed to measure the cost of living, not necessarily the value of money in a broad sense. It is useful for indexing wages, social security payments, or other contracts where the user is a consumer buying only consumer items. It is a very narrow measure of inflation. Milton Friedman and others like him were interested in the broadest meaning of inflation, which is nearly impossible to measure. Yet, the CPI is the most widely used proxy for what economists refer to as inflation.

Over the years, the way the CPI is measured has changed. For instance, in 1984, the BLS changed how the cost of housing was estimated. Janet Norwood, Commissioner of the U.S. Bureau of Labor Statistics (BLS) appointed in 1979 by President Jimmy Carter (and reappointed twice by President Reagan, described the change as follows in a 1983 talk before the City Club of Cleveland.

“We are moving from a measurement of a cost of an asset to the measurement of cost of shelter. What does that mean? People buy a house for two purposes: to live in them and because it is the most important investment most families make. Because we don’t include stocks and bonds in the CPI, we should not include the investment value of a house. Because we have included investment value in the past, the CPI was overstated when home prices rose and understated when they fell. We are moving from cost of asset to cost of shelter because in a cost-of-living oriented index we should be measuring the cost of consumption that people undertake and not the cost of investments.”

We believe Mrs. Norwood was right to do what she did because the CPI was not measuring the value of money but was explicitly designed as a cost-of-living measure. However, if the index was then used to regulate the value of money in a broad sense, something a cost-of-living index never claims to do, problems could arise. Specifically, what if the monetary authority relied on an inappropriate inflation gauge to set monetary policy? What if housing values, for example, were left in the index? Would the Federal Reserve really have been able to keep rates as low as they were in the years before the financial crisis of 2007-2009? Would today’s policy position be justified? We may never know.

Here we will take great liberty in replacing housing as recorded before the 1983 CPI changed back into the calculation of the CPI. We use the shelter weights provided by the BLS and substitute the S&P/Case-Shiller National Home Price index as a proxy for home values. The resulting output is seen in the chart below.

We still think Janet Norwood was right to remove the investment value of houses because she was only interested in the cost of living. Yet, we wonder what might have happened if policymakers used the reconstructed index as their gauge for measuring the value of money and setting policy. We are left to wonder how discussion over monetary policy in the mid-2000s, or those of today, might be different if inflation were measured as before 1984.

Past inflationary cycles are well documented and still relevant to today’s experience. History teaches that persistent inflation is insidious and destructive, but can be a politically expedient way to finance government spending. While it is tempting to lay price increases at the feet of easy to see factors, it is also easy to see how major changes in money and government policies still remain the primary culprits of sustained inflation.

The information contained herein has been prepared from sources believed to be reliable but is not guaranteed by us and is not a complete summary or statement of all available data, nor is it considered an offer to buy or sell any securities referred to herein. Opinions expressed are subject to change without notice and do not take into account the particular investment objectives, financial situation, or needs of individual investors. There is no guarantee that the figures or opinions forecast in this report will be realized or achieved. Employees of Stifel, Nicolaus & Company, Incorporated or its affiliates may, at times, release written or oral commentary, technical analysis, or trading strategies that differ from the opinions expressed within. Past performance is no guarantee of future results. Indices are unmanaged, and you cannot invest directly in an index.

This commentary often expresses opinions about the direction of market, investment sector, and other trends. The opinions should not be considered predictions of future results. The information contained in this report is based on sources believed to be reliable, but is not guaranteed and not necessarily complete.

The securities discussed in this material were selected due to recent changes in the strategies. This selection criterion is not based on any measurement of performance of the underlying security. 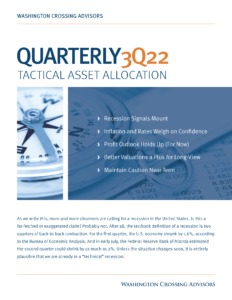 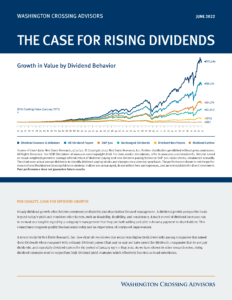