Employment — Not the Root Cause of Inflation

We are not in a recession, but we are seeing data that is uncharacteristically weak for an expansion. The last quarterly GDP report showed 0.7% annualized growth for the latest quarter with real GDP up just 1.8% over the year prior (below). This growth is too weak for comfort as it leaves the economy more exposed to a potential recession in the event of a unforeseen shock. Headline inflation of 0.4% is still well below the Federal Reserve’s (Fed’s) target and core personal consumption expenditure prices are up just 1.2% through December compared to a year earlier. January’s jobs figure was also somewhat weak. Industrial production, a key leading indicator, is also weaker and down nearly 2% year-over-year through December. The equity and credit markets are more concerned about risk. This is confirmed by continued weakness in the WCA Fundamental Conditions index (below) which remains near 40.

Meanwhile, the message from the Fed is mixed. We are in the last few weeks, and we’ve heard hawkish comments from Vice Chair, Stanley Fisher who seems intent on pressing on with rate hikes. Somewhat more cautious sounding statements came from New York Fed President Bill Dudley last week. We remain of the view that the Fed will need to recognize the weaker pattern in the data and should back off the four-rate hike forecast path for 2016. The economy just doesn’t seem to have sufficient momentum to support such a move in our view.

Employment is not a very good forward-looking indicator, but it is an important coincident indicator, and some see it as potential indicator of inflation. We are not convinced on this second point and suspect the Fed may be overly focused on the vague idea of “full employment” as an inflation threshold. As the ranks of the unemployed falls, we are not seeing anything that would resemble a credible wage-push pass through to inflation. Consider that median inflation-adjusted household income in the United States is still near $54,000, far below the $58,000 peak figure seen back in 1999, for example. The historic relationship between inflation and unemployment is also unclear. The graph below plots the monthly inflation and unemployment rates going all the way back to 1960. If a tradeoff exists at all, it is far less straightforward than textbook theory would lead us to believe. Therefore, it makes little sense to assign a great deal of weight to changes in the unemployment rate as a harbinger of inflation. In our view, employment is not the root cause of inflation. We have had full employment with very low inflation and lots of labor slack with very high unemployment. The historic record betrays a dubious relationship between employment trends and inflation, and the Fed knows this too. We, therefore, expect the Fed to adapt to clear signs of weakening fundamental data and expect them to adjust their views accordingly in the weeks and months ahead. 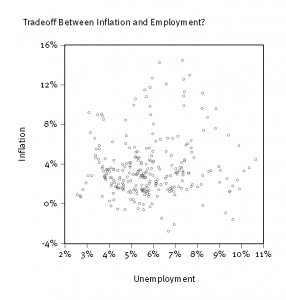 We see that our WCA Fundamental Conditions Barometer continues to point toward a weak picture (below). The January update saw no lift especially in light of the uptick in risk aversion reflected both in equity indices and credit spreads throughout the month. Friday’s employment growth showed just 151,000 jobs added in the month of January. This is not a terribly bad figure, but nothing to get overly enthused about either. Given weakness in the barometer throughout the later part of 2015, we see growth as running well below potential.

WCA Fundamental Conditions Barometer Description: Although there is no simple formula, model, or approach that will allow anyone to precisely forecast markets, we believe that in the long run, markets tend to converge to a “fair value” determined by logical economic relationships. In the short to medium term, however, other factors including a broad range of human behaviors shape the path to longer-run equilibrium. One of the most basic economic relationships is that of economic growth and market performance. The WCA Fundamental Conditions Barometer is one tool that we use in evaluating changes in economic conditions.

EARNINGS UPDATE
Nearly two thirds of the S&P 500 have reported fourth quarter numbers. According to FactSet, earnings are on track for a -3.8% decline. If so, it will mark three quarters of contraction. The 12-month forward earnings figure now stands at $124.29 predicated upon 4% 2016 sales growth and 9.8% net margins. Based on today’s earnings forecast, the S&P 500 trades at 15.4 times expected earnings (compared to a 14.2x average 10-year multiple). Stocks are more fairly priced than at the start of the year, however. This fact is a positive for forward looking returns, especially compared to long-term Treasury yields, which are lower today than on December 31.