Employment Gains Back On Track

The May employment report was solid and brings the three-month average job growth number to 206,000. The unemployment rate of 5.5% is within a range that could be considered within earshot of “full employment.” Wages are picking up modestly, as hourly earnings continue to show signs of lift (now above 2% year over year). Hours worked remain relatively steady.

Consequently, the “output gap” continues to narrow, and all signs are pointing to a rate increase by the Federal Reserve (Fed) later this year. This action is out of step with broader global indicators of growth, and this was highlighted by the International Monetary Fund’s (IMF) suggestion that the Fed hold off on raising rates until 2016 given expectations for slower growth. The IMF cut their U.S. growth forecast to 2.5% in 2015 from 3.1%, primarily in light of a weak first quarter U.S. growth performance (-0.7% GDP growth in the first quarter).

The Fed has repeatedly said they believe the first-quarter weakness was due to transient factors. If that is right, there needs to be some acknowledgement of where we are in terms of the Fed’s mandated goals. On the price level, the forward expectation for long-run inflation priced into the TIPS market has risen to 1.9% from 1.5% earlier this year. The Fed’s target is 2%. Core consumer prices measured by the core personal consumption expenditure (PCE) index is up 1.2% year-over-year, however. The read on inflation must be, therefore, that inflation is somewhat soft compared with the Fed’s objective.

The employment side of things is looking better, however. With several years of uninterrupted job growth, the U.S. unemployment rate is now within the 5.2%-5.6% range often discussed as “full employment” by economists. Combine this with rising hourly earnings and steady hours worked, and the economy’s output gap is moving closer to nil. If we go one step further and incorporate all this into a “modified Taylor Rule” model outlined by Janet Yellen back in 2012, the Fed remains far more accommodative than what that rule implied. To be clear, Dr. Yellen did not endorse that rule back then and still doesn’t today. Instead, the framework used to set rates is based on a more sophisticated model used by the Fed which contributes to the Fed’s assessment of appropriate policy.

The deep recession that left many out of work or underemployed following the financial crisis left significant slack, but that slack is diminishing rapidly as the economy picks up. On the other hand, private credit growth remains weak, inflation is stubbornly low, and interest rates still sit near 0%. The improvement in employment in May is a welcome sign that supports the Fed’s intention to proceed with a rate increase later this year. Still, the Fed is likely to remain slow to raise rates and increases should lag well behind what might otherwise be expected during any other “normal” recovery. 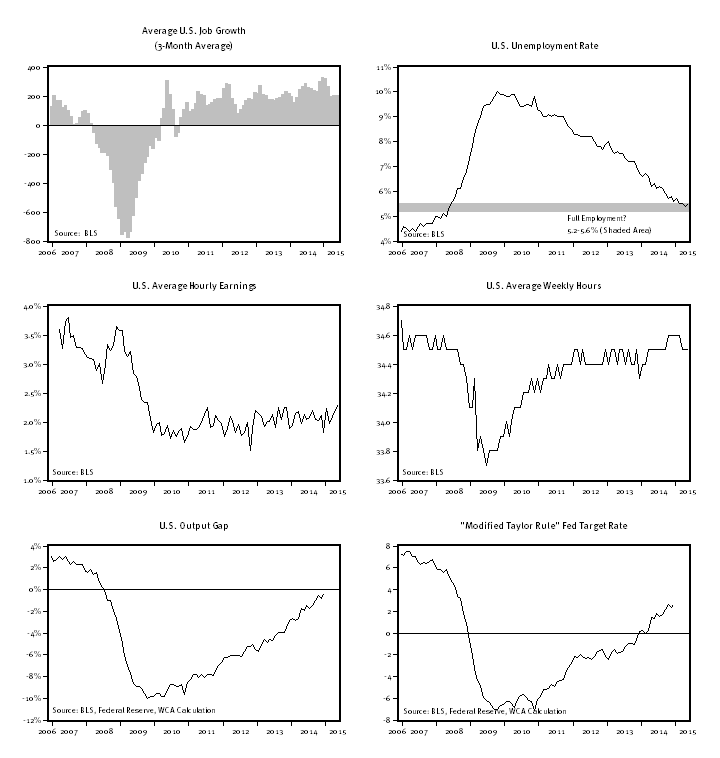